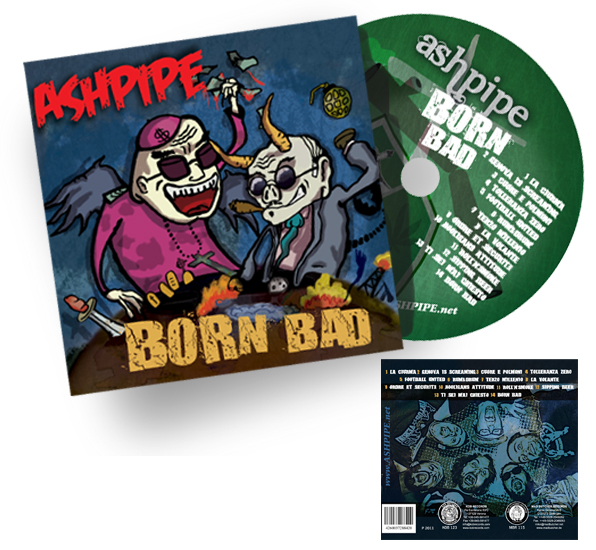 Second chapter for Ashpipe, militant ska/punk’n’folk band from Italy with antifascist and antiracist roots.
After the debut album “Waiting for wave”, self-produced disc released in 2008 and reprinted for the German label “Diffidati Records” in November of 2009, now everything is ready for the new highly anticipated album “Born Bad”.
14 new tracks purely in Pipes style, sung in two voices, half English, half in Italian, with a violin always on the limit and a fresh and powerful sound that contains all the rage and energy of their live set.

The album also includes important guests which: Enrico, vox and leader of Los Fastidios on “Football United”, Marino Severini, leader of the most important Italian militant rock band that are “the-Gang” and Giovanni Bottoglia, guitarist of “L’Invasione degli Omini Verdi” on guitar solo of “Roll’n’Smoke”.
Published by the historic friendship Kob Records / Mad Butcher, the album is also supported by important Italian antifascist brigades which: Joe Strummer Association Magenta, Know your rights records, Filottrano City Rockers and Virtus Verona Fans; rage, immediacy and a direct and frank to say things characterize the album that will help you to remain rebels fighting together for a better world.
da Madbutcher.de